Wujal Wujal is an Aboriginal community located in FNQ, originally known as Bloomfield and later the Bloomfield River Mission.

Wujal Wujal, meaning ‘many falls’, is part of the traditional homelands of the Eastern Kuku Yalanji nation.  The waterfalls are a women’s place and very sacred to the community.  The public can only access one of the waterfalls, which is clearly signed. 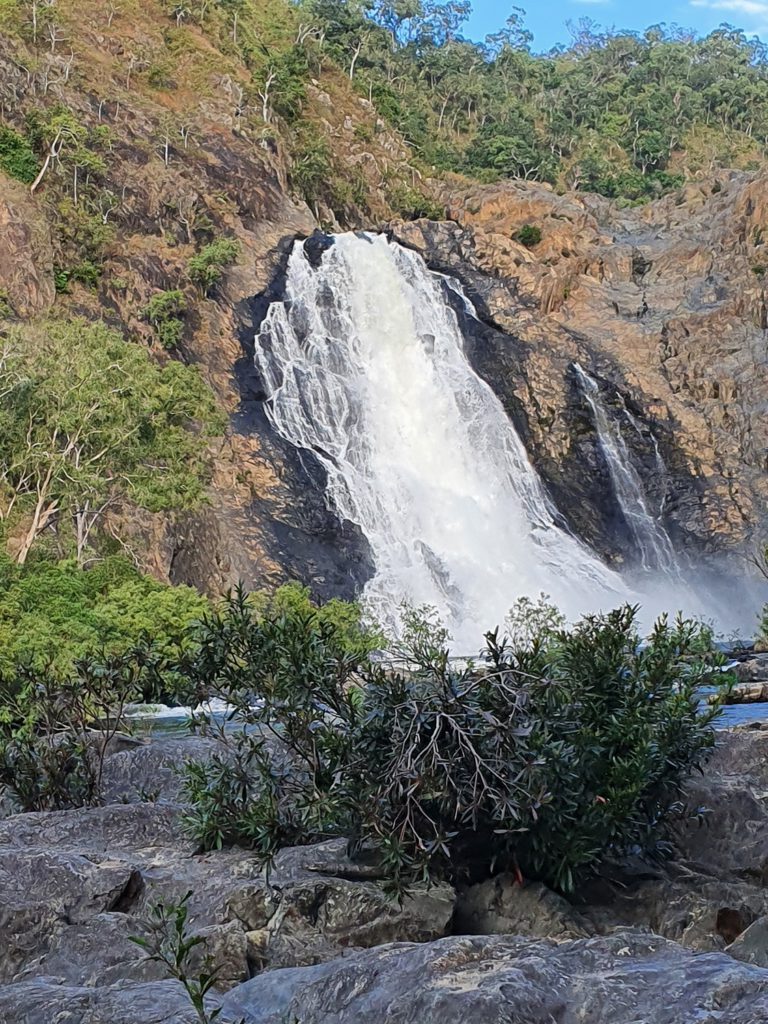 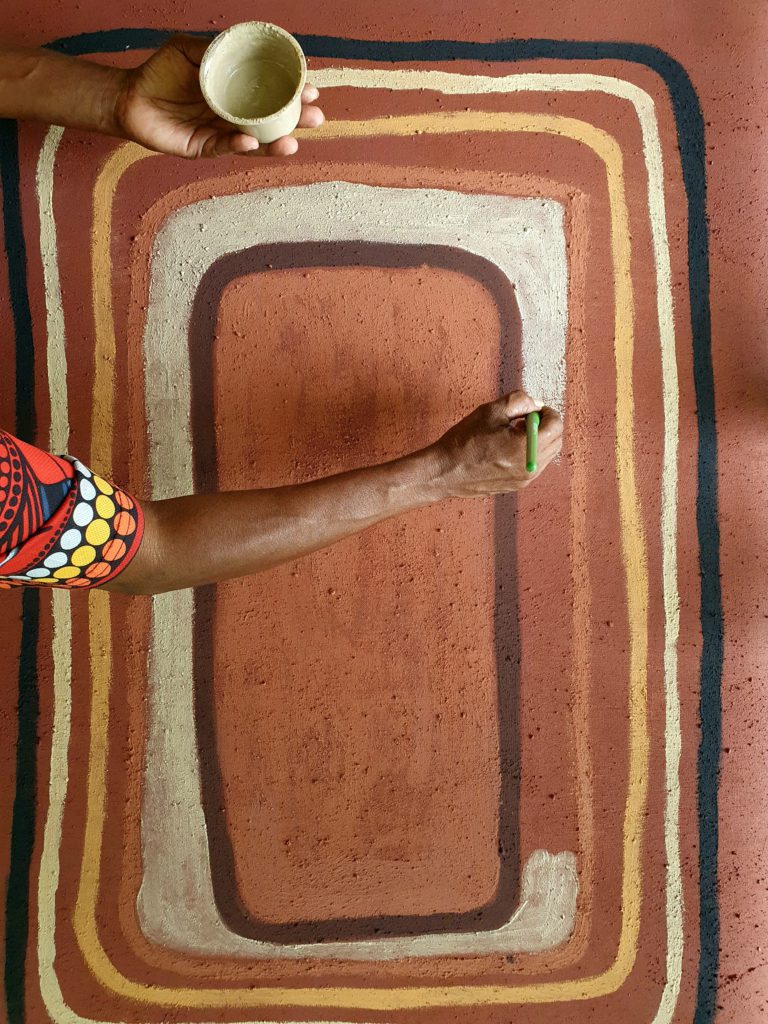 “I am painting kunjuri (shield). Our ancestors used kunjuri and wakay (sword) for fighting to protect themselves from getting hurt. I started watching my grandfather paint when I was 12 years old. He taught me a lot about my culture, and this is why I am interested in kunjuri. My kunjuri are abstracted. When the Missionaries came here to Wujal Wujal; they tried to stop my people from speaking language and practising our traditions and because of this we lost some of the knowledge. However, the old people were very strong and even though it was very hard they carried our culture despite the Missionaries and kept it strong.” Anne Nunn

The first recorded European to visit the Bloomfield River was British Royal Navy Lieutenant Commander Frederick Bedwell, who accompanied Captain Phillip Parker King on board the HMS Mermaid on a hydrological survey of the east coast of Australia.

Gold was discovered in the region in the early 1870s and resulted in a gold rush with thousands of miners setting up camp in the Palmer River area.  A tin mining industry was also established in the area. Tensions between miners and pioneer settlers moving into Kuku-Yalanji territories resulted in violent clashes.

The Bloomfield Mission was considered a failure and government subsidies were withdrawn.  In August 1900 it was decided that the Mission be wound down.

In 1958, the Department of Native Affairs once again approached the Lutheran Church to re-establish the mission at Bloomfield River and provided them with a £2500 grant to fund housing, transportation, and communications. An area of 260 acres was gazetted as an Aboriginal reserve.

For more information about the Lutheran Mission in Bloomfield: German Missionaries

The State Library of Queensland has a small but significant collection of historic photographs of the Bloomfield River Mission. 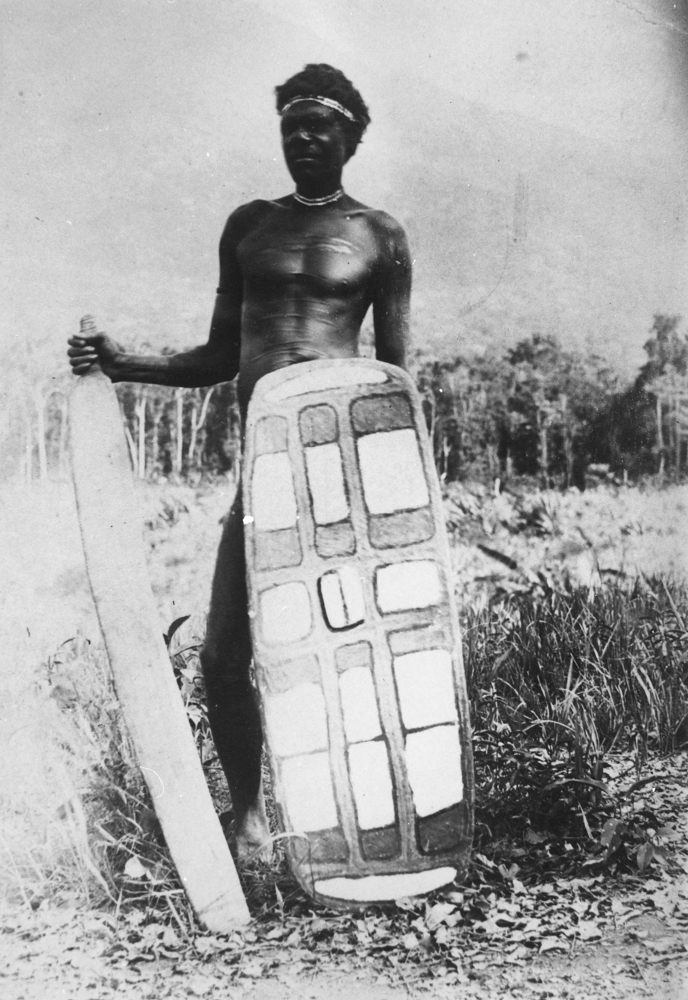 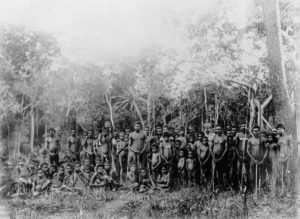 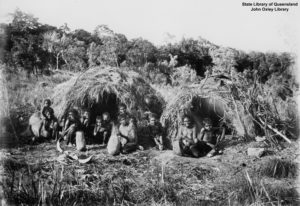 Endeavour Voyage: the untold stories of Cook and the First Australians

In 2020, Bana Yirriji Art Centre artist’s amazing artworks made from driftwood collected from Weary Bay Beach, were exhibited as part of the National Museum of Australia’s critically acclaimed exhibition Endeavour Voyage: The Untold Stories of Cook and the First Australians exhibition.

In June 1770, Captain James Cook and his crew were sailing through the Great Barrier Reef. Despite Cook’s precautions, just before midnight on 11 June 1770 the Endeavour hit a reef off Weary Bay and stuck fast. Bana Yirriji Art Centre artists worked with NMA curator Shona Coyne and IACA  facilitator Edwina Circuitt and were asked to respond to journal writings by Cook and Banks. 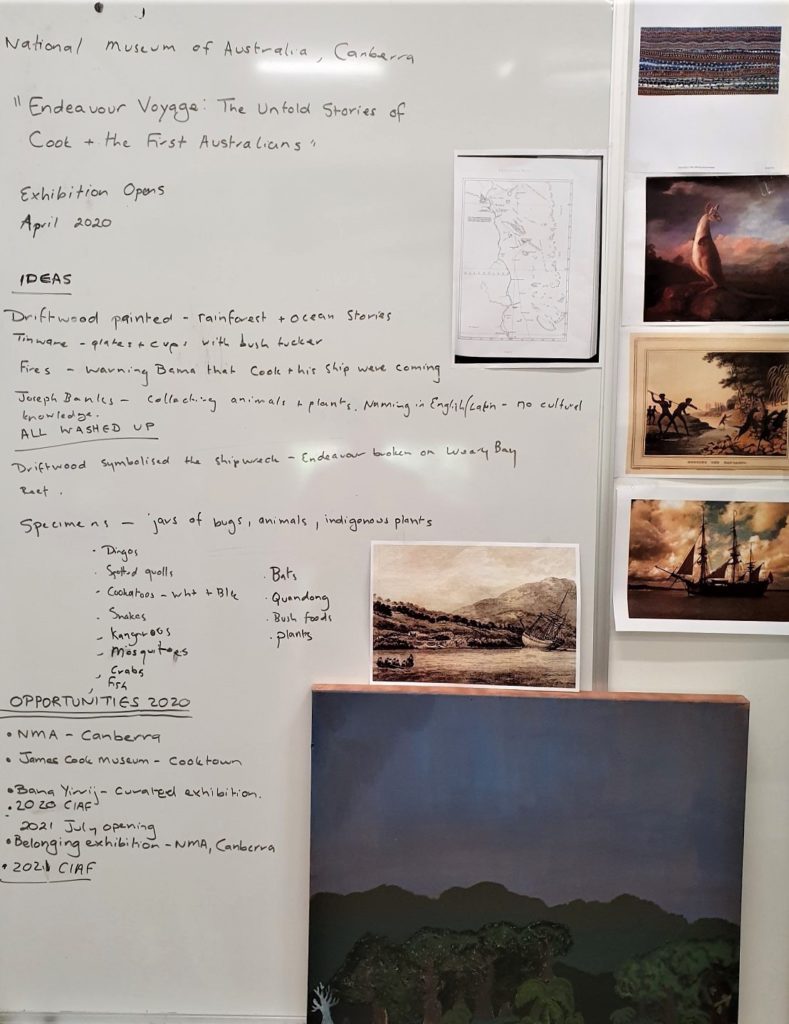 Fear of Death no stard us in the face; hopes we had none but of being able to keep the ship afloat till we could run her ashore. Joseph Banks, 11 June 1770. 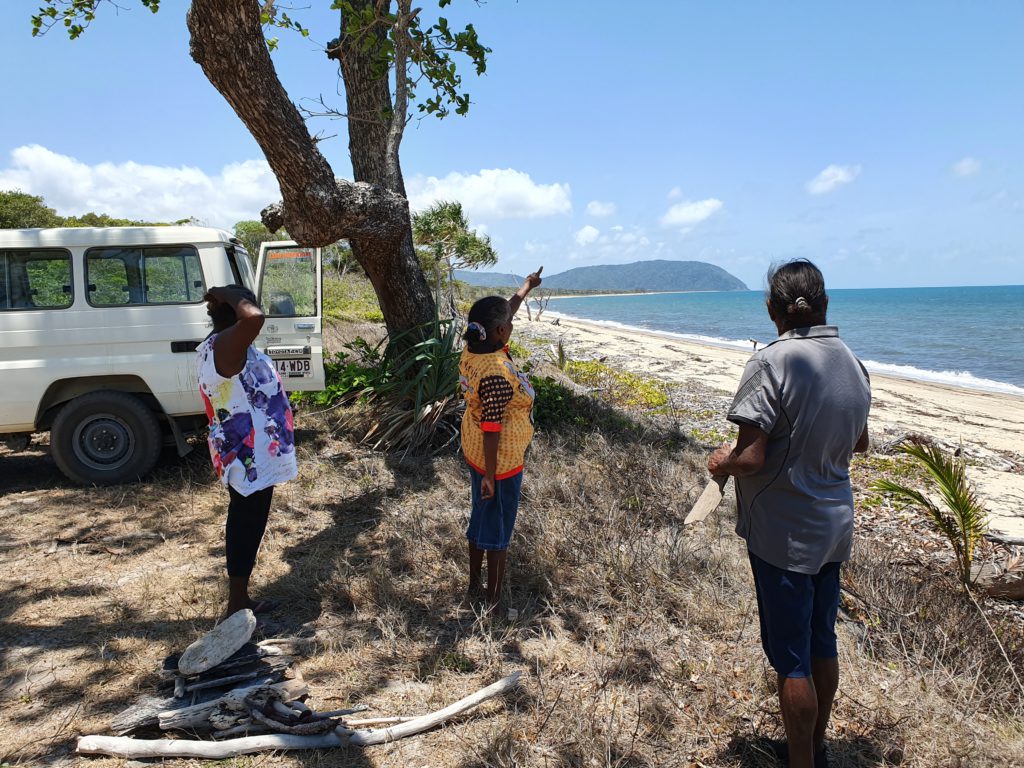 Captain Cook’s ship, the Endeavour, smashed on the reef off Weary Bay. That ship was very badly damaged. They were sinking quickly. Cook and his crew had to throw their barrels of grog, food, guns, cannons and clothes overboard. Some things would have sunk to the bottom of the reef, but some things would have washed up on the Weary Bay shore.

We collected pieces of driftwood found on the Weary Bay beach. Most of it comes from the rainforest trees but perhaps some of the pieces come from the Endeavour ship’s wooden hull?

We are painting our Bama stories on the bits of driftwood. We want Australians and the rest of the world to hear the other side of the Captain Cook story. Bana Yirriji Artists Group Statement 2019

Learn more about the exhibition: nma.gov.au

Hear more about the Endeavour Voyage: the untold stories of Cook and the First Australians  exhibition from Dr Ian Coates and Shona Coyne, curators from the National Museum of Australia

The Endeavour Voyage: The Untold Stories of Cook and the First Australians, is now available online. Buy here 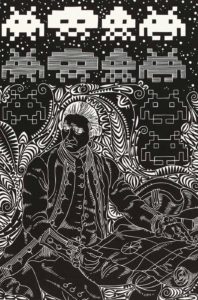 Cover image: By Virtue of this Act I Hereby Take Possession of this Land (detail), 2017, Brian Robinson, Kala Lagaw Ya and Wuthathi. National Museum of Australia

“My driftwood paintings depict Balji (dillybags).  I became interested in traditional Kuku Yalanji weaving after seeing an old photo of my grandmother with her Balji that was taken during the Mission Times. When I was a little girl my grandmother told me how they used to weave Balji (dillybags) from black palm and grasses so they could carry food collected from the Jalun (ocean) and rainforest. 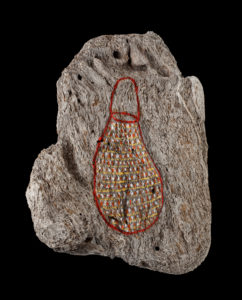 This made me really curious and I started doing research into weaving practices. I found Kuku Yalanji weaving in museums around Australia.  The Queensland Museum’s collection website was especially helpful.  I also found historical photos of women with their dillybags on the Trove and Queensland State Library websites that were taken during the Bloomfield Mission Times.

Kuku Yalanji women were expert weavers.  Maybe Cook saw women with their Balji when he sailed past?

I’m looking forward to learning about how to weave using traditional materials like my grandmother, and excited about the National Museum of Australia and IACA Cultural Connections Weaving Camp that is happening in 2021.

It’s great the National Museum of Australia is supporting this project.” Shanna Olbar 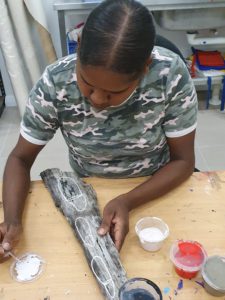